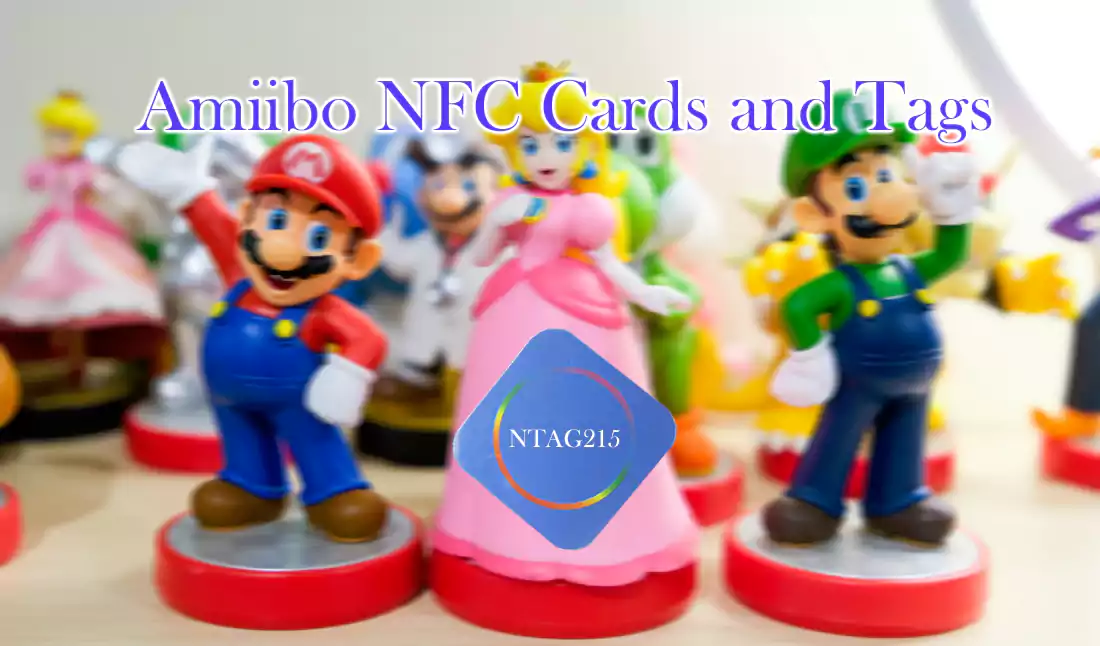 If you’re a fan of Nintendo games, learning how to create your own Amiibo card is crucial. Many Amiibo cards are hard to find. They are either sold out or are too expensive!

If you’ve experienced such frustrations, then this article is for you. We’ll offer a step-by-step guide that will enable you to enjoy your favorite Nintendo games without hassle.

What Is An Amiibo Card?

Amiibo is a toys-to-life platform that was developed by Nintendo in 2014. It uses wireless communication to connect figurines to Nintendo 3DS, Wii U, or Nintendo Switch video games.

It works by bringing toys to life and enabling them to interact with other elements of a video game. The Amiibo toys link to the video game software using Near Field Communication (NFC).

Using this wireless technique, you can transfer data in and out of the video games or across other platforms. This unique feature makes it possible to use NFC-enabled Amiibo cards to directly play games in Nintendo Switch, 3DS, and Wii U.

What You Need To Create Your Own Amiibo Card

If you’re to create an Amiibo card that you can use with 3DS, Wii U, or Switch, then you should meet the following requirements:

If you’re to make Amiibo cards successfully, you should ensure that you have an android phone that’s NFC-enabled.

While you can buy an NFC reader/writer for your PC, it can be a very complicated process. As such, we recommend that you use your smartphone.

If you’re wondering how to make an Amiibo card using an iPhone, then worry no more. You can use your device, together with apps such as Placcibo or CattleGrid.

However, there is a catch in this crucial step:

Not all NFC tags are compatible with Nintendo game consoles. As such, you should be careful when buying an NFC tag for amiibos.

Only buy Ntag215 stickers. This is important, and you should not overlook it! All other stickers WILL NOT WORK and will be a waste of your money.

After confirming that your android device is compatible with NFC, you should proceed to any trustworthy site and free download TagMo App and file (the application is not available at Google Play Store).

Once you install the TagMo app, you need unfixed-info.bin and locked-secret.bin files. To get them, you will need an Amiibo tag to extract the files and use them to make fake cards.

How To Make An Amiibo Card: Step-By-Step Guide

Like earlier indicated, this application is not available in Google Play Store. As such, you must get it from other sources. Ensure that you enable downloads from unknown sources (settings>security>unknown sources>enable). Failure to enable this feature will lead to an installation failure, and you’ll not be able to proceed.

If you’re wondering how to get Amiibo .bin files, then follow these simple steps:

You can repeat this process with all the Amiibos you want. This way, you will get access to your favorite Nintendo Switch, 3DS, and Wii U games. If your Amiibo is rare/yet to be released, you should upload its .bin files to NFCBank and Sub.

Launching the TagMo App is the most crucial step for creating your amiibo card. To achieve this, you should follow this guide to the letter:

Once you complete this process, your NFC tag will contain details similar to the original amiibo card. You will be able to use it to enjoy your game without breaking your bank!

However, you should note that these NFC tags are not rewritable. As such, you should be careful not to make errors when copying your files. Once you copy the wrong files, you will have no option but buy a new NFC tag, which can be costly. 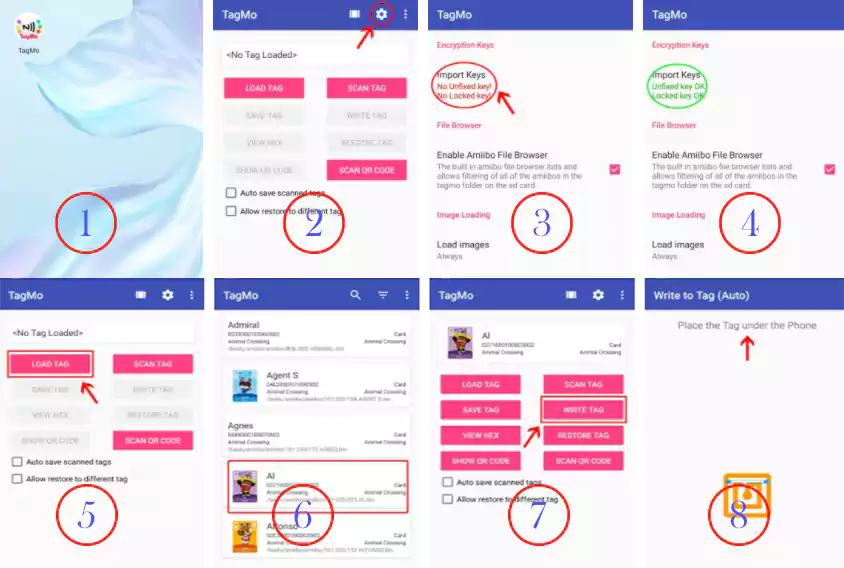 Types Of Amiibo Cards You Can Make Using Your Android Phone

You can create any amiibo card as long as you have its .bin file. It does not matter whether you want the animal crossing amiibo card, link’s awakening amiibo, or joker amiibo; you surely can make it.

As such, the type of amiibo card you decide to make will depend entirely on your interests. Here is a list of 10 most popular Nintendo amiibo cards that you should consider:

While these are these amiibo cards are popular, you should never limit yourself. You’re free to create and explore other amiibo cards to fulfill your gaming desires.

The Legality Of Making Your Own Amiibo Cards

There is no doubt that creating amiibo cards is illegal. It is classified as piracy since you’re using amiibo data to make an unlicensed copy of the card. If you’ve used a CD/ DVD to burn content, then you have the best example of what making an amiibo card is all about.

Nintendo has made it extremely difficult for gaming fans to access original amiibo cards. These cards are scarce, and getting them may require that you spend lots of dollars. Consequently, gamers have used this creative way to make fake amiibo cards.

However, the scarcity of the cards does not make it legal to make the cards. But life would be boring without risking and trying out new things, wouldn’t it?

If you wondered how you could make amiibo cards for your favorite games, this article offers you a comprehensive answer.

If you follow all the steps we’ve provided herein, you can be sure that you will make a fake amiibo to enjoy any Nintendo Switch, 3DS, and Wii U game console.

Q:Can you be banned from using Nintendo for using fake amiibo cards?

A:No, Nintendo has no criteria to track who’s using a fake amiibo card. As such, you will never be banned from using Nintendo products.

Q:Which are the most scarce/ rarest amiibo?

A:Most of the amiibo cards are hard to get. However, some of the rarest amiibo cards include Little Mac, Villager, Lucario, Gold Mario, Meta Knight, Wii Fit Trainer, Marth, Pit, Shulk, and Rosalina.

A:Yes, you can make your amiibo cards when using iOS devices. However, only devices manufactured after iPhone 7 can read NFC cards. Also, you will need other applications such as CattleGrid to complete the amiibo card-making process.

Q:Can I create my amiibo card using my android phone?

A:Yes, you can create an amiibo card with any android device with the ability to read an NFC card. Note that not all Android devices are NFC-enabled. After confirming compatibility, you should follow the processes listed in this article to complete the process.

Q:Can I use one NFC tag to make many amiibo cards?

A:No, one NFC tag will only save data for one game. As such, you will need many NFC cards if you are making many amiibo cards. 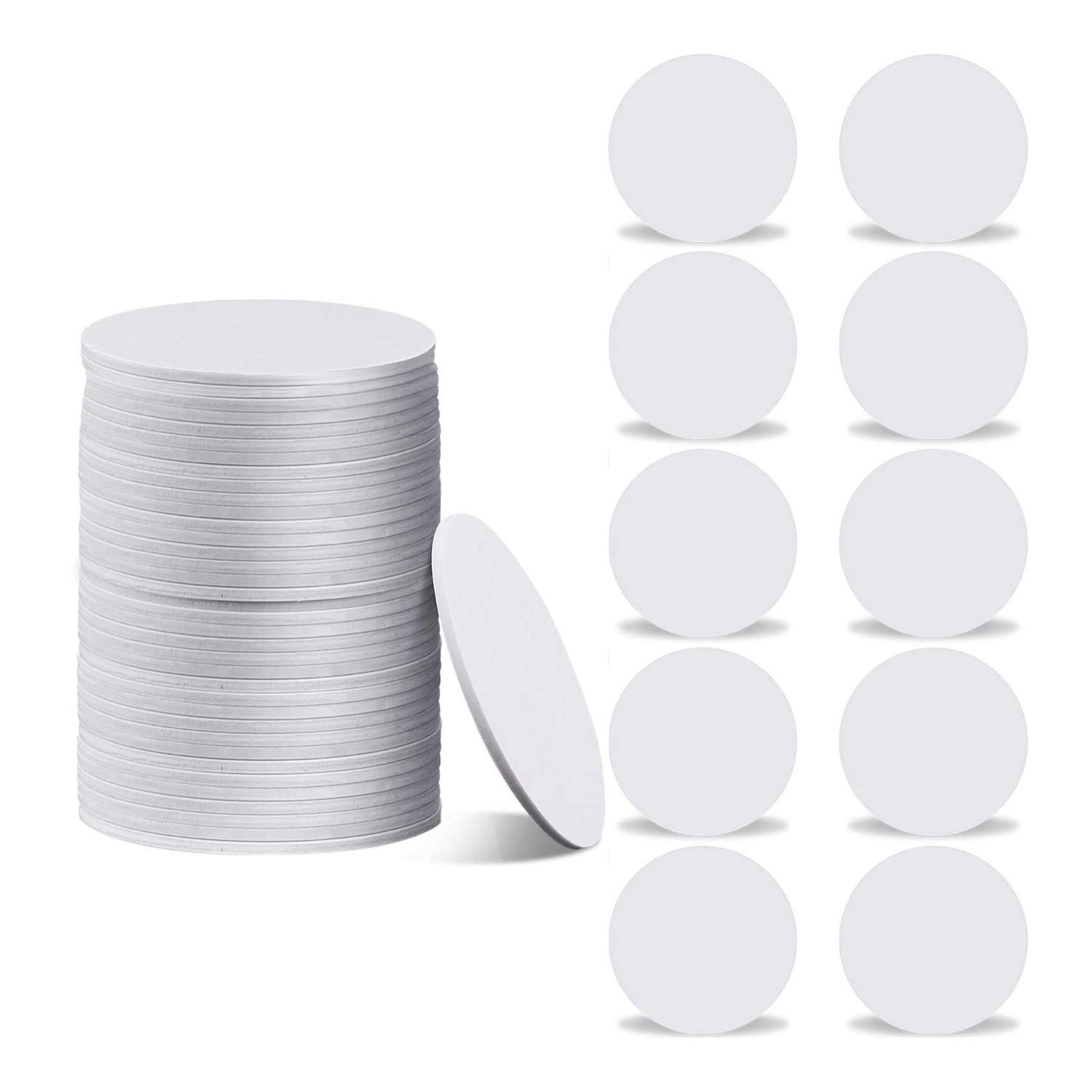 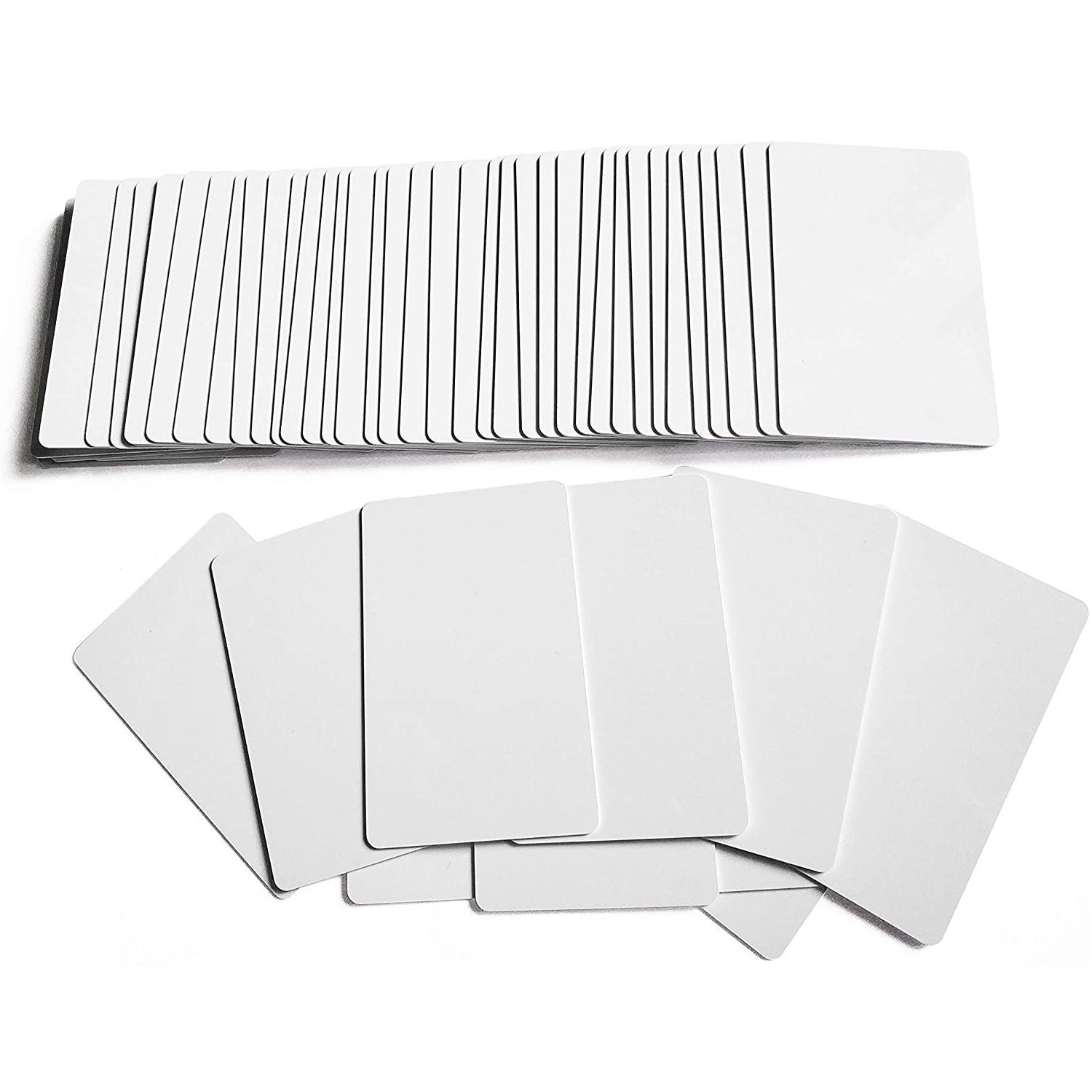 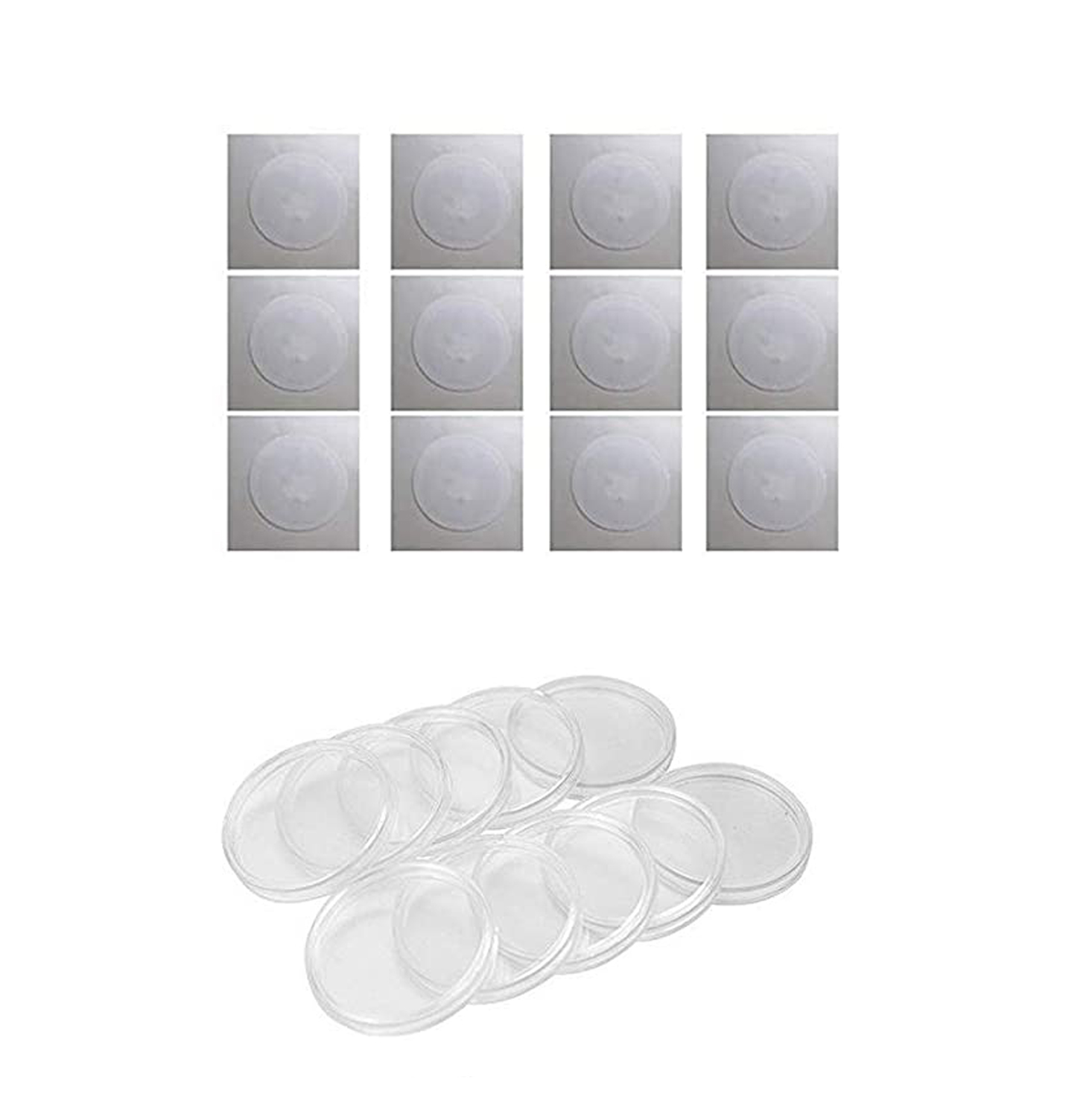